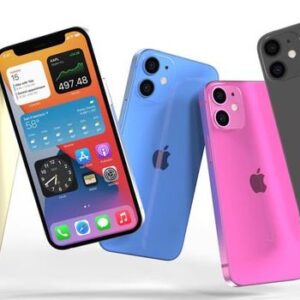 5G speed. A14 Bionic, the fastest chip in a smartphone.An edge-to-edge OLED display. Ceramic Shield with four times better drop performance. And Night mode on every camera. iPhone 12 has it all — in two perfect sizes.

The phone is powered by the new Apple A14 Bionic processor and supports Next‑generation Neural Engine. The smartphone comes with a 5.4 inches of Super Retina XDR OLED capacitive touchscreen, 2340 x 1080 pixels resolution.

The smartphone is rated IP68 under IEC standard 60529 that provides a maximum depth of 6 meters up to 30 minutes.

The rear camera consists of a dual 12 MP camera system with 2x optical zoom out, Digital zoom up to 5x, and Portrait mode with advanced bokeh and Depth Control. It also features a TrueDepth camera for facial recognition to use in stores, within apps, and on the web.